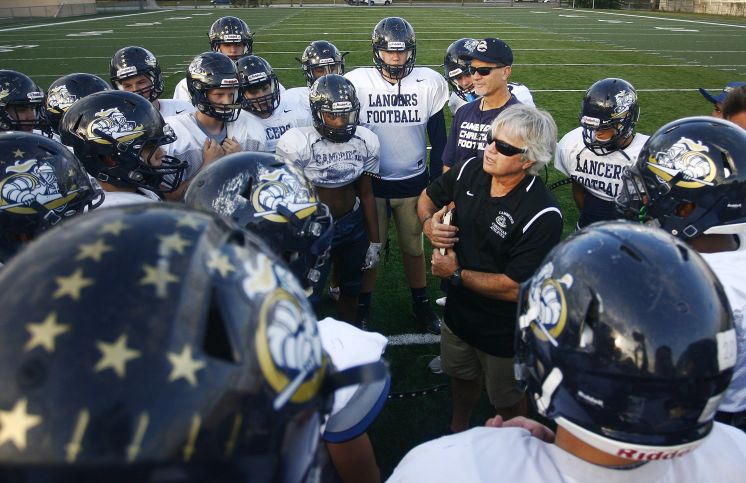 TAMPA – Before Cambridge Christian School’s Bob Dare could revel in the grandeur of coaching in the Class 2A state high school championship game, he had to come up with a strategy. He used practices this week to preach about the X’s and O’s, to emphasize the fundamentals and the execution.

Today is the culmination of all the prep work that went into the game plan – on and off the field.

Dare’s lessons with football also have a higher purpose.

There is a life plan for his players that comes with specific directions. The incoming freshmen discuss how they will become better men. As sophomores, they have to come up with a passage of scripture that reinforces their goal. As juniors, they are required to cite verses from Proverbs 27.

On Sunday, regardless of the outcome of today’s title game against Jacksonville University Christian, there will be a team dinner where the seniors will stand with their parents and give examples of how they turned into better men during their high school careers.

“There’s more to this than football,” said Dare, 59. “We want to see evidence in their life that backs up the man they’re trying to become. Before, we would do Bible study, but this is more concrete. This is more of a game plan of what we’re doing. Just as we plan for offense and defense, we have a plan on how to form these character traits in their life.”

This is something that Dare began when he first started coaching at Northside Christian more than 30 years ago.

But what happens when the plan for the game and life goes off script?

Dare found out in early 2008 when he was ousted as Northside’s coach after more than 21 years. He left as the Mustangs’ all-time winningest coach with 119 victories. Soon after, he was removed as vice principal/dean of students, and his wife, Beth, lost her position as a Bible teacher.

The reason given by then-headmaster Mary Brandes? “God told me to do this.”

For the next year, Dare worked as an official at flag football games before becoming a teacher and an assistant football coach at Seminole High.

“My gap after Northside was a recovery, healing time,” Dare said. “It was a chill, growing time for me as a man and as a leader, as well as for my family. It was a tough time. There was a lot of soul searching, a lot of how did we get here and where do we go and what happens to our faith from here.”

Dare was intent on staying in the public school system. In 2009, he was offered the head coaching position at Cambridge. For Dare, there were fears. He did not know if he wanted to return to a Christian school, especially after his experience at Northside.

“Cambridge called, and I spent a lot of time praying about it,” Dare said. “We met with the people at the school, and I believed in them and they believed I was the right person for the job. We right away felt like family”

For the past five seasons, Dare led the Lancers to winning records and the brink of the playoffs. Last season, Cambridge was 8-2, one game short of their first playoff appearance.

This season has been the breakthrough. Dare has led the Lancers to their first undefeated regular season (12-0), first No. 1 ranking in the state poll and first playoff appearance as a district champion.

Three weeks ago, the twists and turns of Dare’s coaching career intersected in the Class 2A region semifinal when he faced his former team, Northside. Cambridge won that game, then went on to beat Admiral Farragut in the region final and Naples First Baptist in a state semifinal.

That win helped Dare – and the Lancers – reach the state title game for the first time. Cambridge is turning the championship into an event, canceling classes at the upper-school level so students can travel to Orlando’s Citrus Bowl.

A lot of that success can be attributed to Dare.

“Have you seen a MasterCard commercial? Priceless,” said Cambridge headmaster Tim Euler when asked about how much Dare has meant to the school and the football program. “Coach is the envy of every administrator in Tampa because he represents Cambridge with passion and excellence. He has given Lancer Country a gift that will never be matched.”

Dare has turned the program into a family affair. His sons have coached with him and continue to help out. His wife takes photos at the games and bakes chocolate chip cookies for the team whenever they win.

“We’ve had a lot of cookies this year,” Dare said.

This leap to postseason glory was something Dare could have predicted because of the foundation set with last year’s players in building a title-contending team.