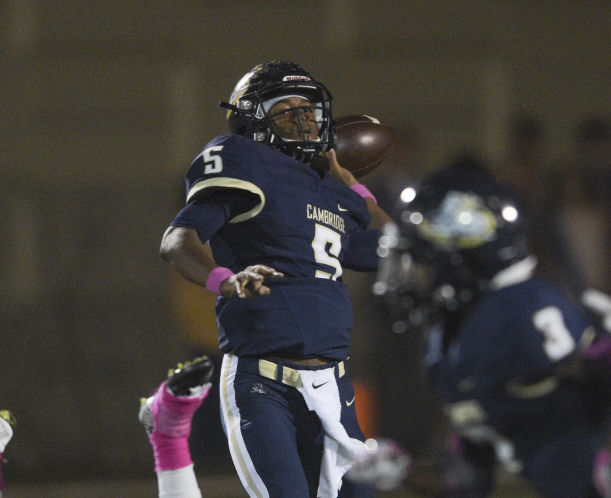 TAMPA – Two years ago, Bob Dare didn’t know what to do with him.

The head coach at Cambridge Christian, had a freshman, small and skinny, but elusive and skilled. Jaylin Jackson played wide receiver, defensive back and receiver. He was 5 feet 7, 140 pounds. But he was fast. Really fast. So in a junior varsity game, Dare watched him quarterback the team.

“And he ran over and around everybody all over the field,” Dare said. “I knew he could be a good varsity player.”

Two years, 2 inches and 20 pounds later, Jackson is a junior and the starting varsity quarterback for Cambridge (8-0). He’s getting ready to lead the Lancers against Admiral Farragut (3-4) in Friday’s region semifinals. He’s still short of the prototypical quarterback size, with the physique that resembles a skill player (160 pounds).

“(My size) doesn’t really affect how I play,” Jackson said. “I got the job done.”

He’s heard all the heckling: Why are you playing quarterback? Can you see over the line? You should be a receiver.

He doesn’t fight the comments, rather he stores it away as fuel.

“I like it,” Jackson said. “When people doubt me, I like to show them who I really am and what I can do.”

And he’s done a lot in two years. The Lancers, 22-1 in that span, have scored more than 30 points in every game this season, more than 40 points four times, even 65 and 85. And that’s in large part due to Jackson, who has passed for 1,094 passing yards and thrown 13 touchdown passes. He’s also run for 508 yards and 10 touchdowns.

Dare finally knows what to do with him.