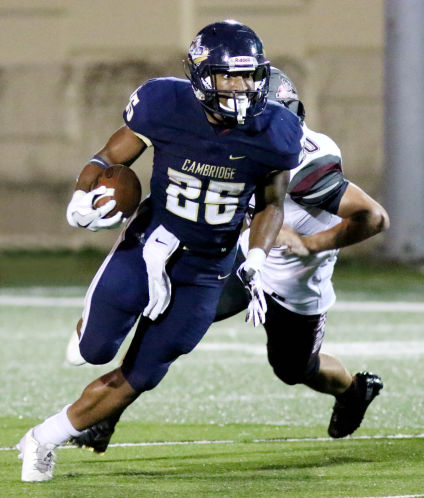 TAMPA – Between all the penalties (34 combined for both teams), turnovers (combined four) and more than 20 minutes of heavy rain, the highly-anticipated Class 2A, District 5 matchup between Cambridge Christian and Seffner Christian featured some pretty fine plays and players.

In the end, Cambridge, the No. 1 ranked team in 2A, gathered the majority of the highlights to seal up a 34-7 victory Friday night.

“It was not pretty, and we definitely have some things we need to clean up,” Cambridge coach Bob Dare said. “But we did make some adjustments and I thought we played better as the game went on.”

The list of top Lancer performers begins with some familiar stars from the past couple of years, including:

” Junior quarterback Jaylin Jackson, who rushed eight times for 92 yards and three touchdowns and completed seven of 16 passes for 111 yards;

” Running back Andrew Cunningham, who rushed 21 times for 186 yards;

The Crusaders intercepted Jackson’s second pass and followed with a 79-yard march in eight plays, the last one a 5-yard touchdown run by Tyreek Carter.

But after that drive Seffner Christian freshman quarterback Isaiah Knowles was often running from the Lancers’ defensive pressure. Knowles ended up with 11 completions for 64 yards.

Overall, Seffner Christian coach Travis Puleo said he was encouraged, namely because the Crusaders kept it close for a while (trailing only 21-7 at the half), and because, “We never, ever quit.”

“I can take nothing away from Cambridge because they are a great team and they were very well-prepared,” Puleo said. “I do know that we will get better from this. I know we will. This is a growing process and we will grow from this experience.”

Cambridge (5-0, 1-0) is also looking forward to some tough games in the next five weeks, including a few against highly ranked teams.

“We look forward to those games,” said Dare, who took the Lancers to last year’s Class 2A state final before losing and finishing 13-1. “We like the challenge.”