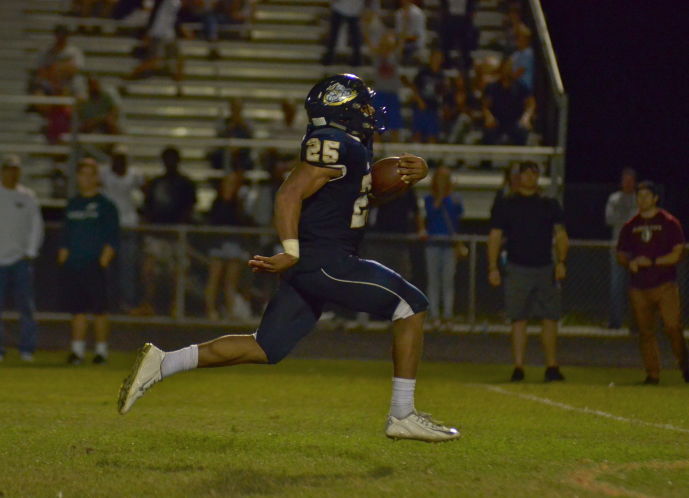 TAMPA – Cambridge Christian’s historic season added one more wild chapter Friday night. Trailing by 18 points with just over two minutes left in the third quarter, the Lancers scored 22 unanswered points and held on for a 36-32 win over Admiral Farragut in the Class 2A region final at Jefferson High.

Not only does the win keep Cambridge Christian (12-0) undefeated, it also sets up the school’s first appearance in a state semifinal. The Lancers will play at Naples First Baptist next week.

“That was a great game,” said sophomore running back Andrew Cunningham, who scored the winning touchdown with five minutes to play in the fourth quarter. “I’m just so glad we are in the final four. We beat a very good football team tonight.”

The Blue Jackets (10-2) were a good team – for about two quarters. After giving up a first-quarter touchdown, Admiral Farragut scored 25 unanswered points and led 25-7 late in the third quarter. Two of those touchdowns came on big plays.

Admiral Farragut led 12-7 at the half. Then Donnie Crum returned the third-quarter kickoff 95 yards to make it 18-7. It became 25-7 when Craig Watts picked off a Jaylin Jackson pass and returned it 65 yards for a 25-7 lead. Then things turned around quickly.

Aaron Pierre scored on the second play of the fourth quarter, and the Lancers cut the lead to 25-15. Jackson ran in a two-point conversion. Crum then fumbled the kickoff, and Cambridge Christian capitalized when Jackson barreled in from 1 yard out to cap a two-play drive to cut the lead to 25-22.

On the Blue Jackets’ next possession, Derrick Powell Jr. intercepted an Austyn Causey pass and returned it 23 yards for a touchdown. In the span of just over five minutes, the Lancers went from an 18-point deficit to a 29-25 lead.

“I saw the receiver run a short hitch and the quarterback was rolling his way,” Powell said. “I just started running that way. I almost dropped it, but I held on and got in the end zone.”

The celebration was short-lived. For the second time in the game, Crum returned the kickoff for a touchdown. This time it was 90 yards and gave AFA a 32-29 lead. But there was plenty of time left for the Lancers to regain the lead.

Cunningham gave it to them when he burst 53 yards up the middle to make it 36-32. The Blue Jackets could not recover. Causey was intercepted to end one possession. The other came with only 17 seconds left, and Causey’s pass to Crum was defended.

“I saw the big hole and went for it,” Cunningham said of his touchdown. “I had big holes to run through all night. I could tell they were getting a little tired and we had to take advantage.”

Cunningham finished with 18 carries for 127 yards.