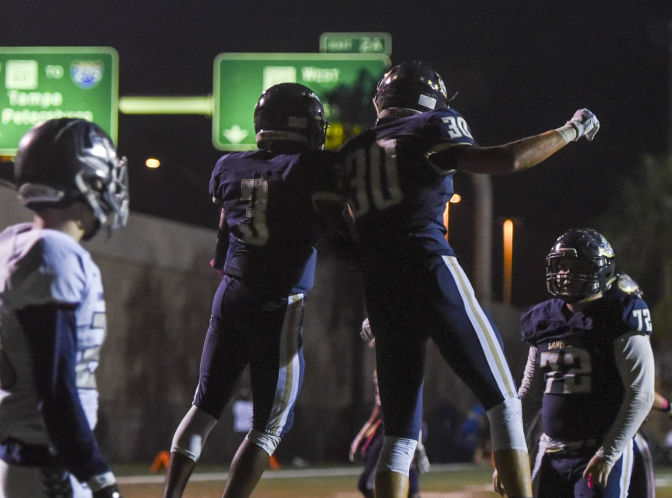 TAMPA – Cambridge Christian’s defense tallied nine sacks and four turnovers as the Lancers bullied their way to a 42-6 win over Carrollwood Day. Cambridge Christian (8-0, 2-0 district) claimed the Class 2A, District 5 title for the second straight season. Senior J’Kobi Reddick had his first three-touchdown game ever, scoring on two interception returns and a 56-yard punt return. The loss eliminated Carrollwood Day (1-6, 0-2) from playoff contention and earned Seffner Christian a runnerup spot in the district.

Key drive: Andrew Cunningham came up with a fumble on Carrollwood Day’s opening drive and seven plays later Cambridge Christian was on the board as Jaylin Jackson scored on a 3-yard, off-tackle quarterback keeper.

Stars of the game: Reddick totaled 163 all-purpose yards with his interception returns of 28 and 79 yards plus the punt return, all for touchdowns – Cunningham rushed for 140 yards and two touchdowns, including a 15-yard run in the third quarter where he dragged a defender who had his shirttail the final 10 yards – Lancers senior kicker Jacob Enns was 6-of-6 on extra points – Carrollwood Day quarterback Chris Butash tossed the Patriots’ only touchdown a 19-yard strike to Raymond Woodie in the third quarter – Markeis Colvin had three tackles for a loss on defense and three receptions for 72 yards on offense for the Patriots.

Stats of the game: The Lancers defense had nine sacks, led by 11/2 each from Will Singleton and Richard Gouraige, and held the Patriots to less than 150 yards of total offense.

Final word: “Coach wanted us in man coverage and wanted me on their best receiver and I told him before the game I’d get the job done. I was just reading both the wide receiver and quarterback, as soon as that receiver broke I put my eyes on the QB and made some plays.” – Reddick, on his two interceptions and one pass deflection.