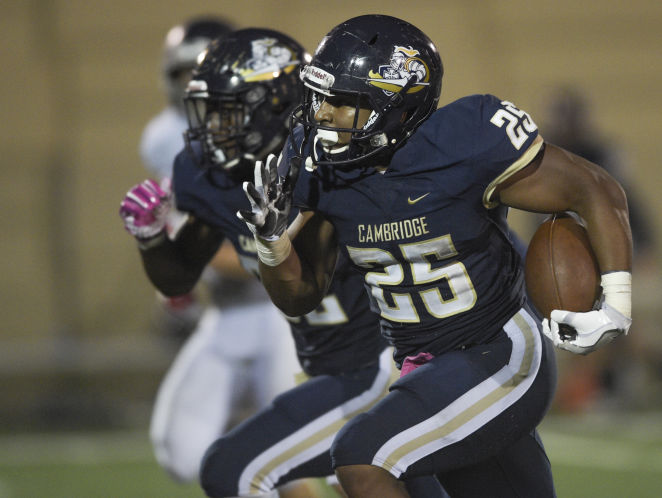 TAMPA – He dominated the second half – again.

Check that. Andrew Cunningham dominated the entire game. The Cambridge Christian running back rushed for 134 yards and had three touchdowns (two running, one receiving) in the Lancers’ 44-34 win over Clearwater Academy.

Cunningham started where he left off last week against North Florida Christian: the end zone. On the first possession, Jaylin Jackson orchestrated a 16-play drive, and the last three plays were just Cunningham bulldozing his way to the end zone. He scored on fourth and goal from the 1-yard line.

Clearwater Academy (4-3) struggled for much of the first half. Starting quarterback Janiero Crankfield hurt his right ankle on the first possession, thrusting backup quarterback Demetrius Davis into the game.

But the Knights went three and out on their first two possessions with Davis at quarterback.

“Anytime you lose your best player to an injury, that’s going to hold you back,” Clearwater Academy coach Jesse Chinchar said.

While Clearwater Academy tried to find offense, the Lancers (7-0) scored another touchdown, a 15-yard pass from Jackson to wide receiver Ricky Mann, to grab a 13-0 lead.

The Knights finally scored, on the ensuing possession, when Davis hit running back Courtney Eubanks across the middle for a 24-yard touchdown.

Cunningham didn’t score again until the second half, on a 15-yard pass from Jackson. Then, just like last week, he exploded for a long touchdown run – this time a 60-yarder. He broke three tackles on that run, then left the entire defense in smoke.

“It was a really close game and the team really needed me to step up,” Cunningham said. “All props to the linemen.”

The Lancers led 26-7 after Cunningham’s two scores. Then Crankfield, who spent much of the first half nursing his ankle injury, returned to the game, hobbling and limited.

“Does it feel better?” a trainer asked him.

On his first possession, he fired a 48-yard touchdown to Danny Bowman down the right seam to make it a 26-13 game. Then a 61-yard rushing touchdown by Keyvone Lee early in the fourth quarter brought the Knights to within six.

But Clearwater Academy could not get the stops it needed. Jackson fired a 17-yard touchdown pass to Darryl Mercer to make it 32-13. Then when Clearwater Academy went three and out and turned it over on downs, the Lancers scored again to make 38-20.

After trading scores, the Knights scored again, on an 80-yard touchdown pass from Crankfield to make it 44-34. But they didn’t convert the two-point conversion and time ran out.