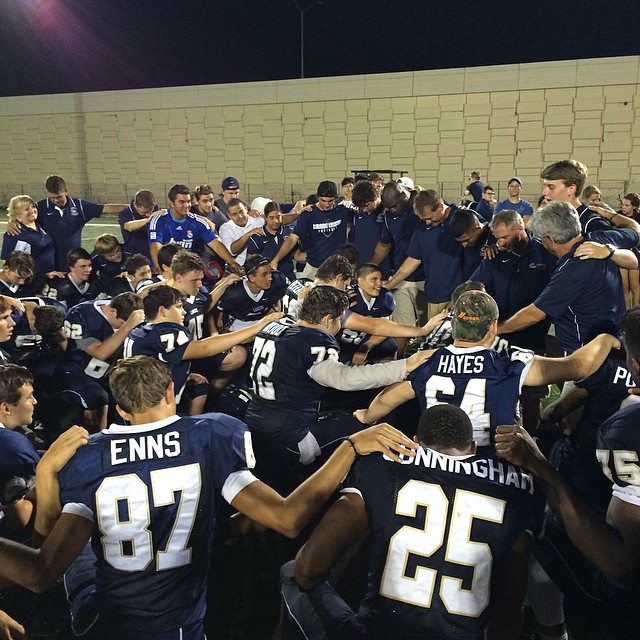 Sat. May 23, 2015 | Andy Warrener
At Skyway
Score
Cambridge Christian 35, Calvary Christian 0
Spring game-breakers: The Lancers were dominant in every phase Saturday night, led by a quartet of rising sophomores. Quarterbacks Jaylin Jackson and Caleb Young combined to scorch the Warriors. Jackson got it done through the air, going 11-for-16 for 125 yards and a 28-yard TD to Derrick Powell Jr., who finished with 60 yards receiving. Young, younger brother of graduating 2,300-yard passer Garrett Young, rushed for 90 yards and a TD, including a 50-yarder that set up the Lancers’ first score. …Towering freshman Richard Gouraige put in some time on offense but was a force from his defensive end position. Gouraigae finished with three sacks, a pressure, a solo tackle and a tackle-for-loss. …The Lancers made a defensive stand on Calvary’s first possession of the second half as the Warriors pressed into the Lancer 20 only to be thrown back with consecutive sacks by Zack Stein and Gouraige. Gouraige would create the pressure that caused a turnover on downs that drive. …Rising sophomore Andrew Cunningham had 158 total yards and two scores. The first a 60-yard punt return and the second a handsome, 84-yard TD run where he broke through the middle, slipped outside and raced down the sideline to pay dirt.
Did you know? Both Calvary and Cambridge play on artificial grass fields. Cambridge plays at Skyway in Tampa where the center of the field was recently replaced with a different type of artificial grass. …The Lancers will have just two seniors in the fall to go with 14 sophomores. …The Lancers wore some of Riddell’s Speedflex helmets for Saturday’s game. The Speedflex design is aimed at reducing concussions and was debuted in the NFL by the Green Bay Packers’ Eddie Lacy.
Audible 1: “That stand was big, I learn a lot from my coaches. We have an excellent defensive coach (Roger Allan, defensive line) and I rely on my linebackers to fill the holes.” – Gouraige
Audible 2: “My job now is to not let them think they’re too good.” – Lancers coach Bob Dare