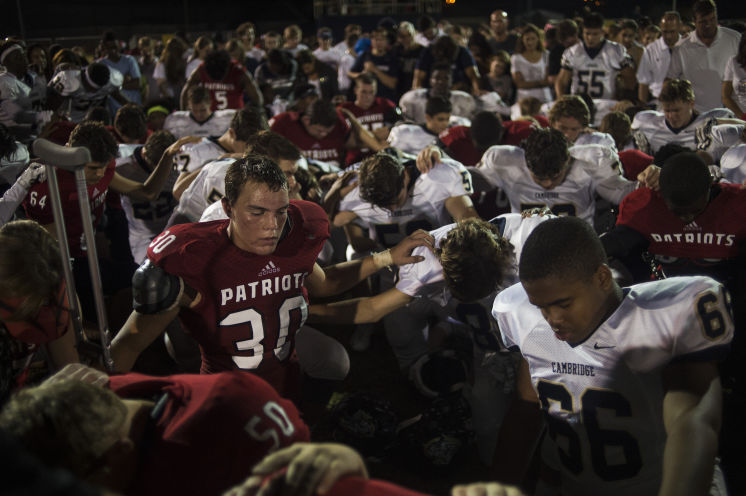 The Lancers were hardly tested, mowing through all of their opponents while enjoying a second-half running clock against each.

On Friday, however, that luxury of dominance came to a swift halt in arguably the biggest game in program history at rival Carrollwood Day.

But it turned out the critical test that had eluded the Lancers didn’t matter. In fact they embraced it, grabbing an early advantage and holding on in a 21-12 victory to wrap up their first Class 2A, District 5 championship.

“It feels good, it feels really good,” said Cambridge coach Bob Dare, who captured a district crown for the first time since 1989 with Northside Christian.

“They put a lot of time in. – We’re just grateful for the guys we’ve had an opportunity to work with and I think the Lord is blessing the way we’re doing things.”

Although the end result was one to relish, the beginning was rather forgettable for Cambridge (10-0, 4-0). The Patriots opened with a 14-play scoring drive that concluded with a 22-yard field goal from Stephen Walters for an early lead. Then, on the Lancers’ ensuing possession, a mishandled snap by quarterback Jaylin Jackson resulted in a turnover.

It didn’t last, though, as running back Andrew Cunningham found the end zone from 12 yards out on Cambridge’s next drive. Jackson, a dual threat, tacked on a 16-yard score in the second quarter.

CDS (6-3, 3-1) made it a two-point game at halftime on a safety and a 10-yard TD pass from Raymond Woodie to Cross Tate. The Lancers answered with an 11-yard score by Cunningham late in the third quarter.

“We pushed through,” said Cunningham, who finished with 95 all-purpose yards. ” – We wanted a game and we got one.”

In a last-ditch effort by CDS to mount a late comeback, Walters had a 39-yard field goal blocked by sophomore Scott Ater, which sent Cambridge’s sideline into a frenzy.

“This is the best feeling in the world,” Ater said. “There’s nothing like it. I’m so happy right now.

“We worked hard and we finally finished it.”